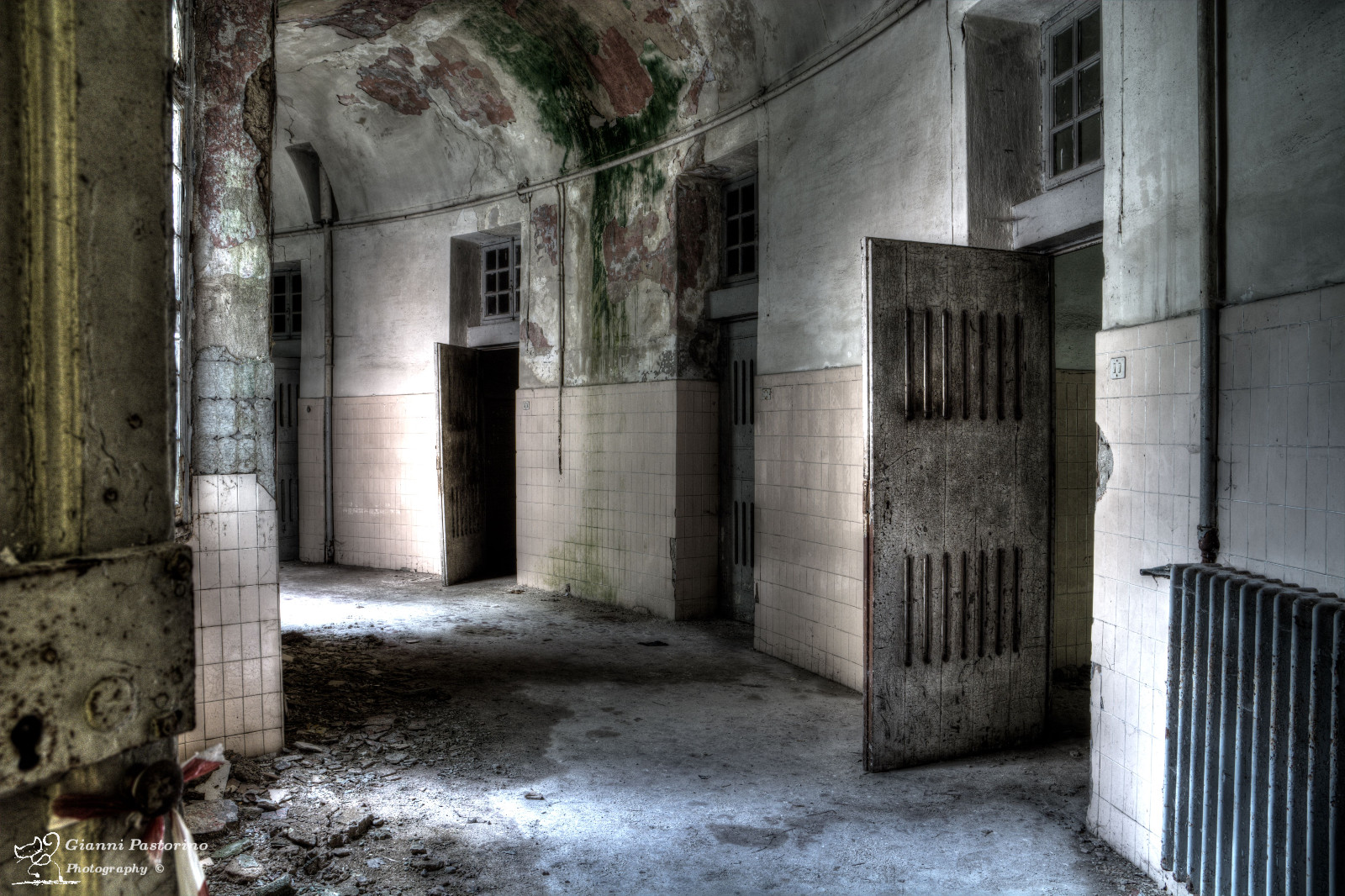 The psychiatric hospital in Voghera, in the Oltrepò Pavese area, normally can not be visited, because the property was officially closed in 1998; but you can enter, during rare openings, for day trips with local experts. Past the gate, the structure is in the form of a large central building connected to different halls, all located in a park of considerable size, that, as the guardian explained us, was once graced by typical Italian gardens: it is apparently a majestic and impressive construction. Nevertheless, the impression that arouse the interior of the building is completely different, as it emerges in all its horror, the real purpose for which the mental hospital in Voghera was built. As the guide says, during the second half of 1800, the main social problems of the city were represented by the orphans, who were obviously put in special facilities not hidden from the rest of the community, and people with mental disorders. The solution proposed by the authorities for the last category was completely different, as they needed to be marginalized and even hidden from the rest of society. It ‘just to avoid this problem that in 1876 was built the asylum. 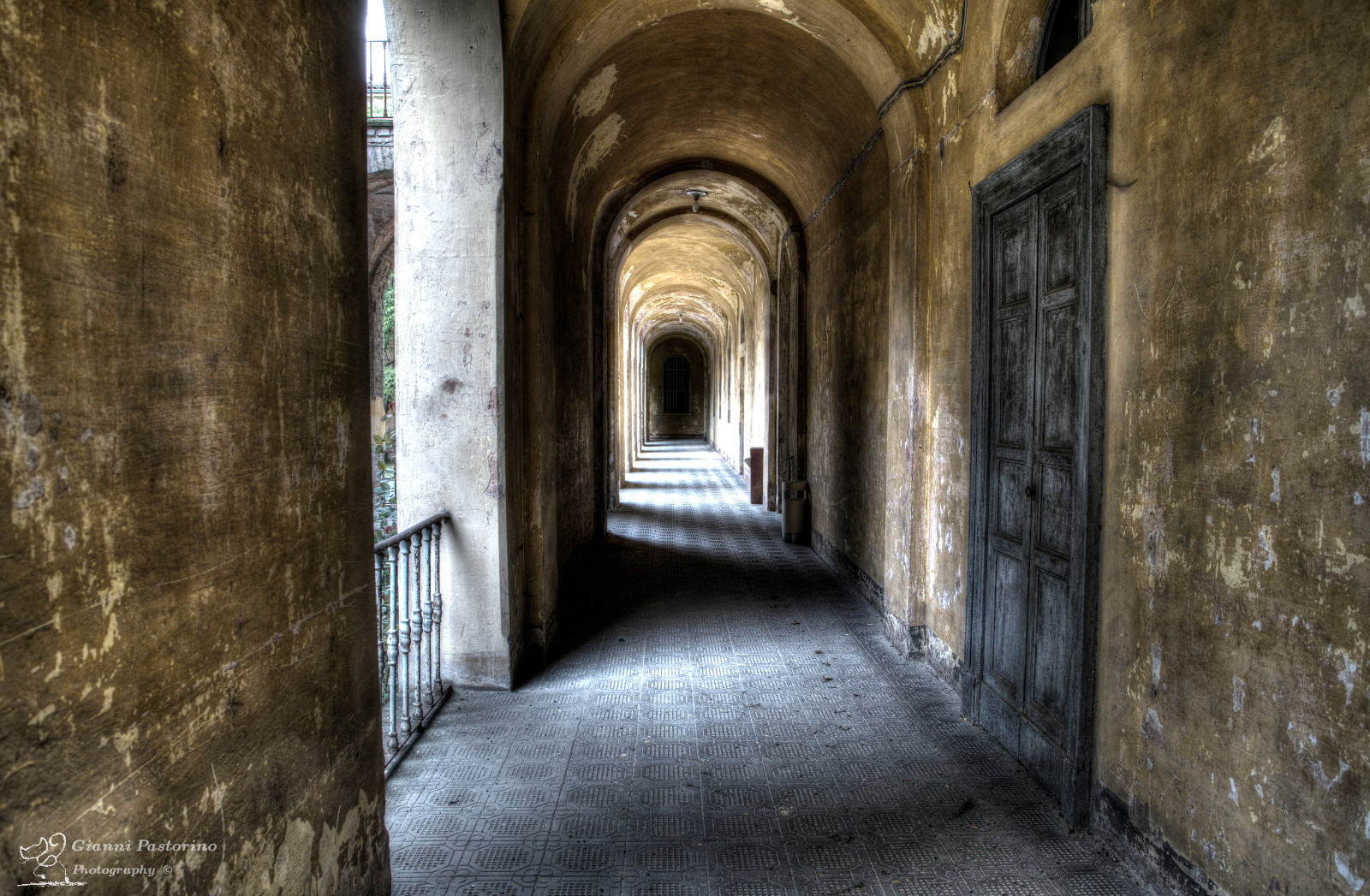 Those who, in the late nineteenth and early twentieth century were locked inside the hospital, often on the initiative of the same family, immediately lost all contact and all connection with reality and the outside world. Since his entry into the mental hospital, the patient was deprived of his personal effects and his clothes, he was given a bed in a room and obliged to spend their days in a large common room: this was the civil death of the patient . The guests were then divided into different departments, depending on their mental disorder: the “quiet”, the “almost quiet”, the “dirty and lame”, the “agitated” and the “sick and weak”. As for the treatment, until the early fifties, the only methods of “care” were diabetic coma, electroshock and lobotomy, whose the only effects were worsening the already unstable mental condition of the sick. 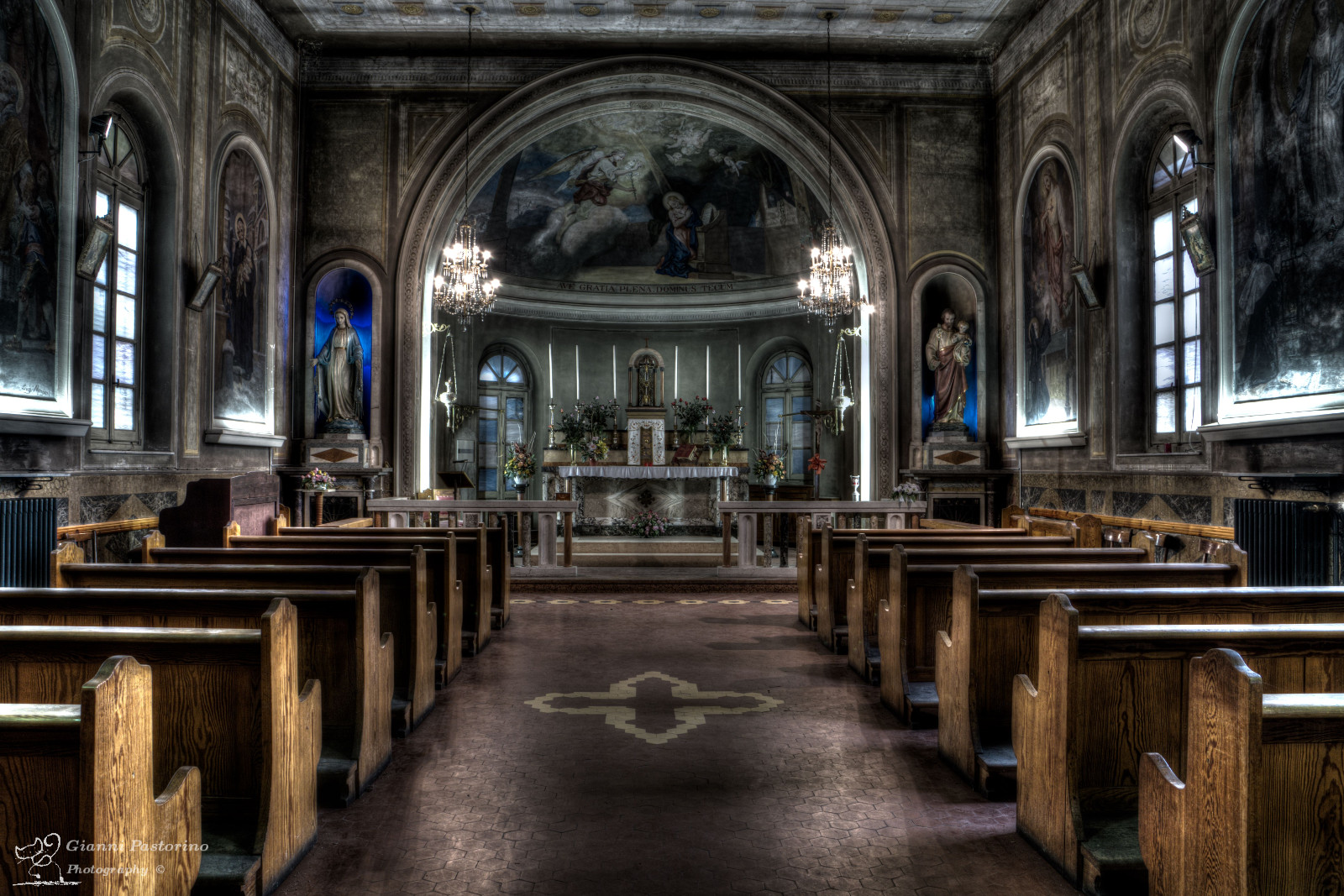 The patients had the right to walk in public areas and interact with each other until the moment they show excessively violent attitudes, a danger to the safety of doctors and other patients. In such cases, they were locked up in a special area of the structure with a circular base called “rotonda” (round room). This area, much more like a prison that an hospital, was constituted by a series of cells arranged in a semicircle, whose walls were without corners and the beds fixed to the ground. Unfortunately you can not visit it entirely because they are damaged parts following an earthquake of some years ago, however the guide assures us that, despite the time has passed, it is still possible to see the nail marks left by patients in moments of agony.
In the empty majestic corridors that guide us in this great madhouse, we see that nature has begun to take back the spaces lost at the time of its construction: shrubs that penetrate the windows, light blurred by branches, windows covered by ivy. The nature is caming back. 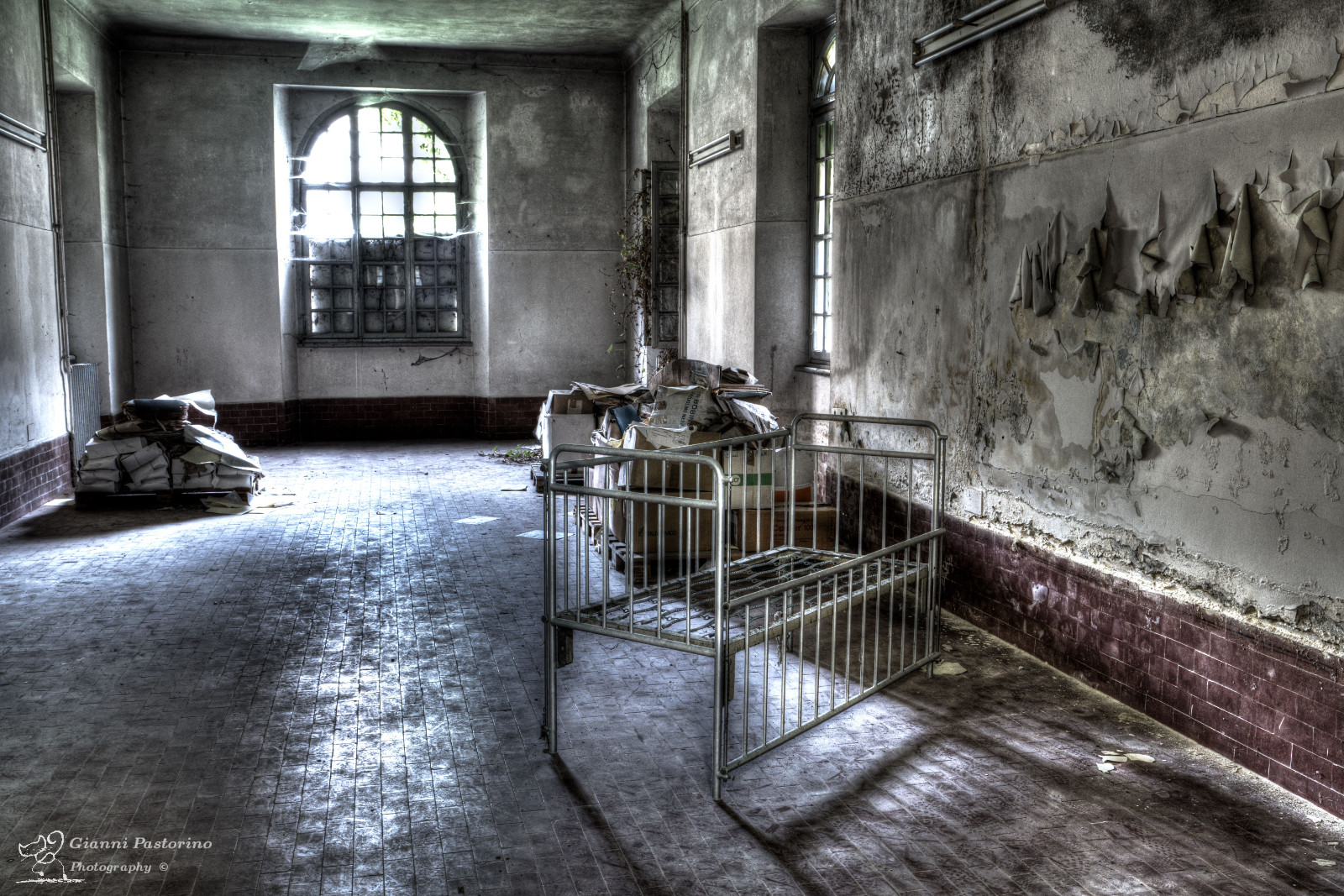 The corridor presents a series of side rooms, empty, dusty, with narrow walls, up to the bottom where we see an open door in the middle of the room with the skeleton of a bed, one of the few items of furniture were still inside the structure. In addition, you may notice hanging on the doors of the various rooms drawings, engravings and decorations, works of patients made in moments of tranquility and the only trace of a human presence in this place. 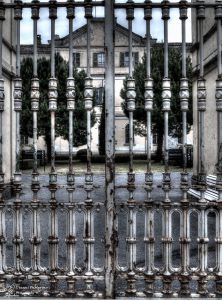 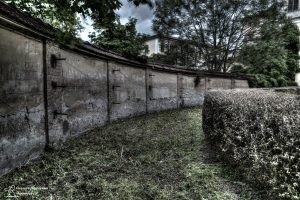 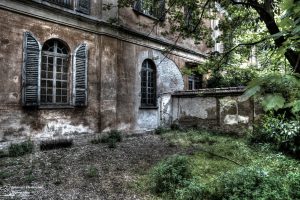 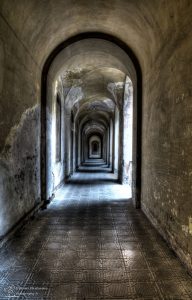 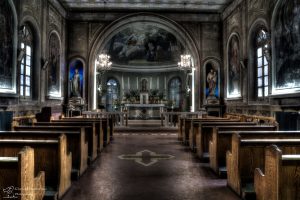 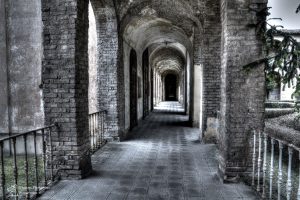 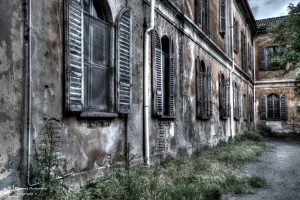 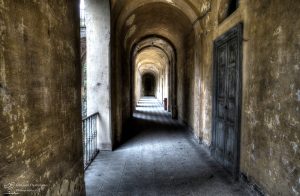 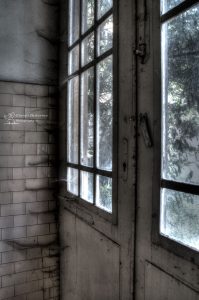 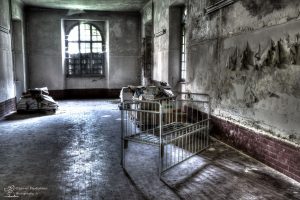 The visit of the abandoned asylum undoubtedly can not leave us indifferent, both for the state of deterioration that characterizes the structure, a phenomenon reported by the organizers of the visit, and for the historical record that it embodies. Dedicated to all those who entered in the asylum as patients and have lost their dignity as people.

Gianni, known with the nick of “Ferro36”, was born in 1963. Photographer, history and radio lover, passionate about Vintage pc. Partner in exploration is his doughter Eleonora, passionate about writing. Together they are called “I Pastorino”.