“I think I losing faith in this moment and having no faith, I believe neither in God nor in hell. If I do not believe in hell, I’m not afraid. And if I’m not afraid, I’m capable of everything.” Pedro Almodóvar 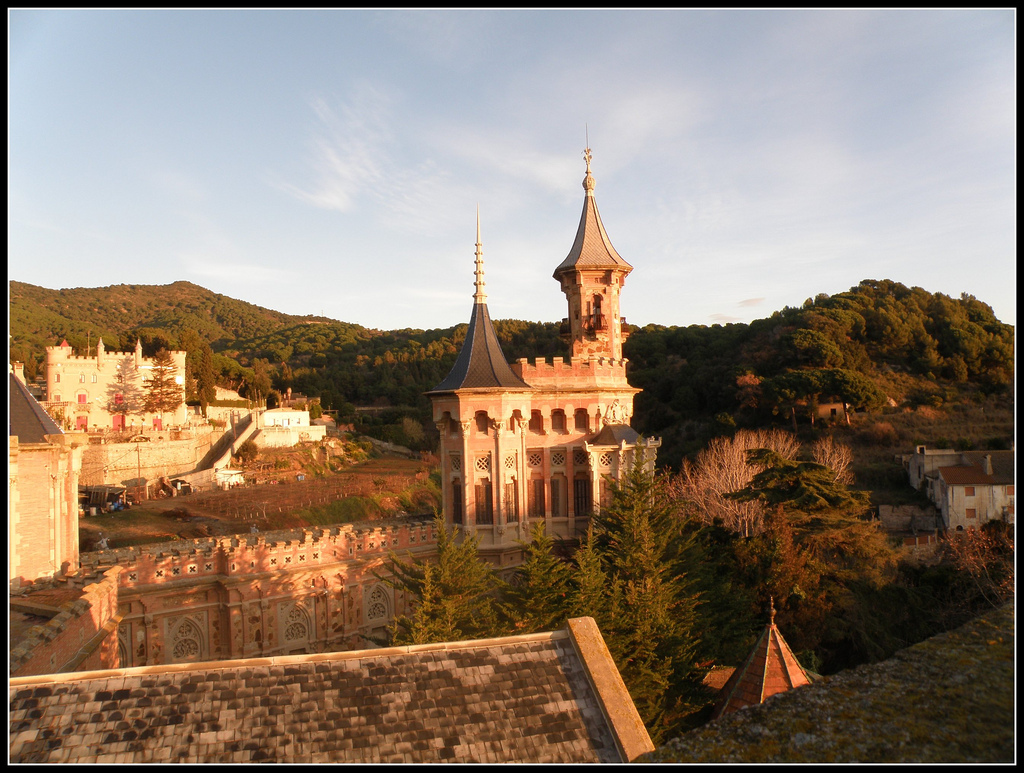 It’s been almost five years since this visit, but I still have in my heart the beauty of the place and the bitterness of not being there enough time.
I regret I cannot return.
It was early January 2011 when I went to Barcelona for a few days vacation.
It was few months that I was watching the pictures of this Escuela Catolica form mates explorers of Barcelona, and so, two of them came to pick me at the front door of the hotel at 7:00 o’clock.
The two friends took me in front of this impressive and imposing building.

The first light of dawn lit up the facade of pink and lanterns along the street were still burning. We walked through the main entrance, and, from an hole in the wall we entered in the garden, filled with statues, balustrades, stairs, fountains and ponds with water lilies and frogs.
Still overwhelmed by darkness, we crossed glass passages, chapels, and imposing halls with many different styles, refined decor and details that left me breathless in the morning light, while we were going to the large bell tower.

We climbed to the top, the cool morning air caressed my skin and from there I could see the beauty of the sea and the distant outline of Barcelona.
A magical atmosphere and a sea of emotions washed over me as I watched the sun rising from up there. In addition, I could see the spiers and colored roofs of this enchanted palace, which looked like it came from one of the books of Carlos Ruiz Zafon.
When the sun rose, the facade of the building lit up in all its beauty and its rooms were filled with light.
I began to photograph the heart of the mansion, with its large living room fireplace, its valuable paintings and the most beautiful rooms.
The beautiful church where unfortunately, the precious paintings had already been stolen … unaware that soon, for my eyes and my heart, the show would be over …

A so beautiful sight finished too early. A Spanish guard ordered us to get out. My friends tried everything, but there was no way to corrupt him.
Unfortunately, a few months later, the place was sacked from all his paintings, looted statues and wonders, and finally botched and devastated by vandals.
My heart is crying for not having been able to capture it all.

The entire palace consists of a set of very different styles of buildings. It was owned by Henry Cardona and Erill, governor of Catalonia at the end of the sixteenth century. Then it belonged to the Counts of Santa Coloma (XVIII and XIX) and in 1890 it passed into the hands of Antonio Folch Borrell, political and financial. Borrell made changes with the modernist Guitart Lostal.
On the death of Borrell in 1910, as a bequest, the property was intended for teaching. It was then run by the Pious Schools until 2001, when it was sold to a private that wanted to converted it into a luxury hotel. In this charming palace full of treasures was also shot the famous film “La mala Education” by Pedro Almodóvar.

Here’s a video with some parts of the film where you can see different views of interiors and exteriors of this place: