By Stefano BarattiniNovember 7, 2017No Comments 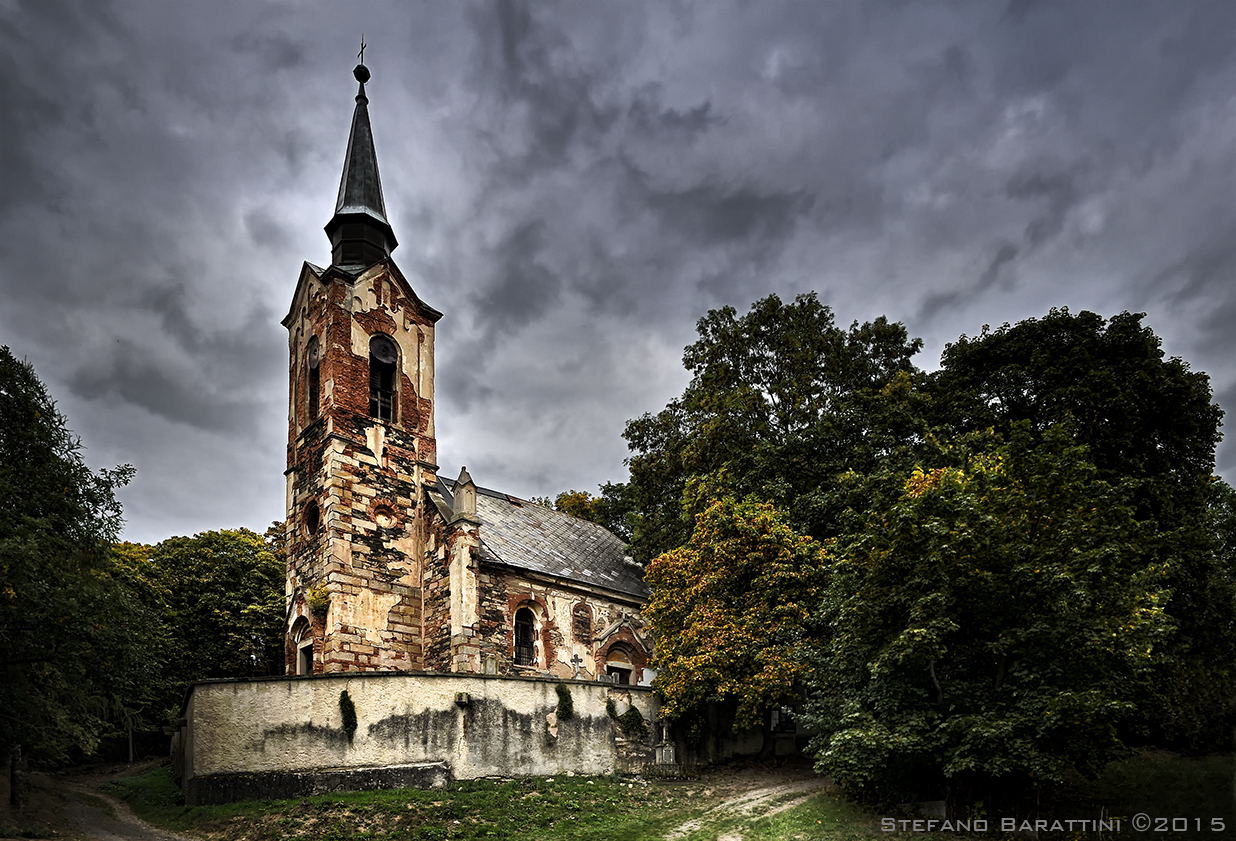 There are places that for their peculiarity are destined to remain in the memory, to survive the time, and to shine as witnesses of the past.
We are in the Czech Republic, in the Pilsen region (notable for the famous beer), just one hundred kilometers from the border with Germany.
It is not a place where you can go in just one day, because the road in the last fifty kilometers is a slow one, not only because it is narrow and in a bad state, but also because you must go slowly to appreciate the impressive landscape.
But if you plan to take a trip there, you can not miss a visit to the small St. Georges church in the village of Lukova.

We arrive in the afternoon after contacting the caretaker, who was waiting for us at 4pm. Time is certainly not the best; cloudy, cold, and a few drops of rain, are framing a village of a few houses and the church, making it even darker than it really is.
In the air you start to feel the smell of burning wood, a sign that the hot season is turning to end, no one around, but we can hear voices of children playing …. It seems to be in the “Sleepy Hollow” movie.
We send an email to the caretaker who arrives in a few minutes.
A slender, old little man, a slight smile on his face and eyes that transmit simplicity and serenity … he walks toward us with a small barrel containing some banknotes in his hand.
It is called Petr Koukl and he is the man who runs the little church and he is also the one who, with the help of voluntary donations, tries every day to save it from ruin and oblivion.
He speaks German and very little English, but tries to explain something with the help of his photo album, after he opens the side door of the church and makes us enter.
From the outside the church had a creepy air, but inside it is really disturbing, and the photos downloaded from the internet are nothing … finding inside is a real experience that arouses something between fear and respect.
On the old wooden benches sit on the human figures wrapped in white cloth, and the plot and openings reveal the void within them, like silent ghosts of the past, intending to pray. 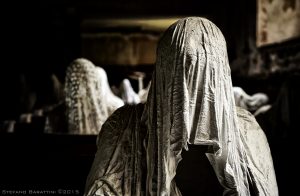 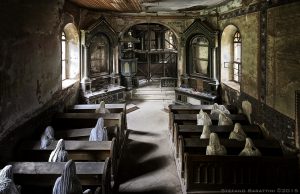 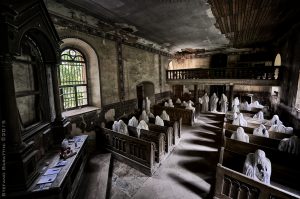 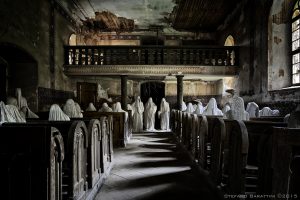 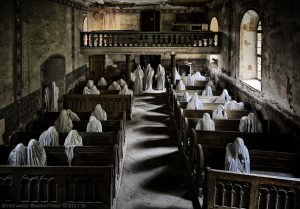 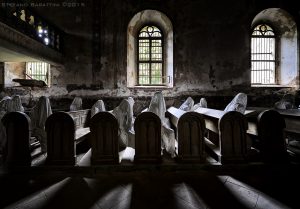 The emotional impact is strong, and for a moment I’m pervaded by a sense of reverential fear towards them. At some moments it almost seems to feel whispers and even if they can’t move, you have the irrational feeling that they can stand up.
The history of the church of St. Georges in Lukova dates back to 1352, the year of its construction, but the events that accompanied it over the centuries have built around the sad name of the damn church.
In 1796 a great fire destroyed it almost entirely and only four years later, reconstruction work take place, which take just over half a century, transforming it into the Gothic building still visible today.

A century later, in 1968, during a funeral, the roof of the faithful in the church collapsed; 32 were the victims of the dramatic event, and since then the church was abandoned, marking its cruel fate.
About fifty years after, the church was completely abandoned, ruined and at risk of demolition.
It is at this point that in 2014 Czech artist Jakub Hadrava decides to put in place a bold and bizarre project.
He takes friends and acquaintances, he first covers them with cellophane and then with plaster and gypsum-filled gauze.
This is how the famous ghost figures of the St Georges church take life. 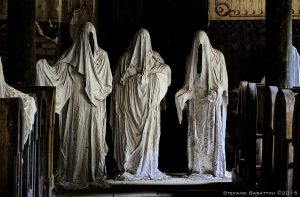 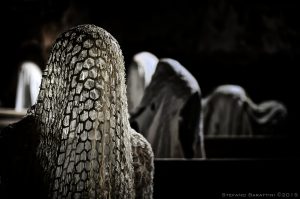 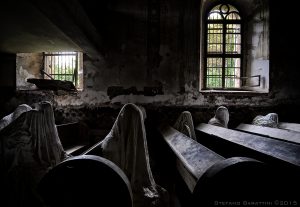 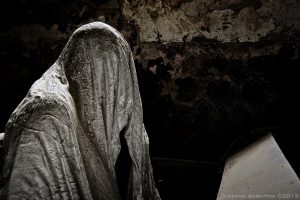 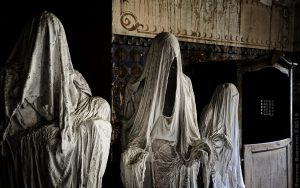 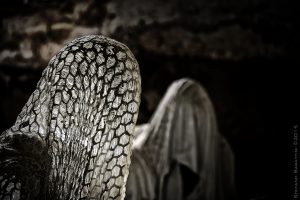 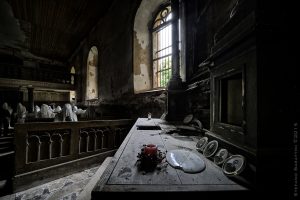 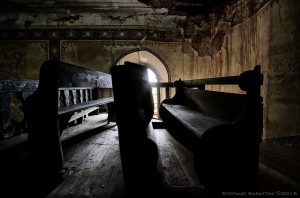 There are 32 ghosts, in memory of the 32 victims of the disaster.
From this moment on, the church begins to become famous and today, people comes from all over Europe and the world to admire it and to know its strange story.

Photographer since 1979, when he began to travel. Since 1990, he has been working with the magazine “Mototurismo” and later “Scooter Magazine”. He has now found his greatest interest in urban exploration. He has published some books on it, and collaborates with some major projects, including his group “Manicomio Fotografico”.