The visit of this factory was not provided, in fact, we passed there by chance. 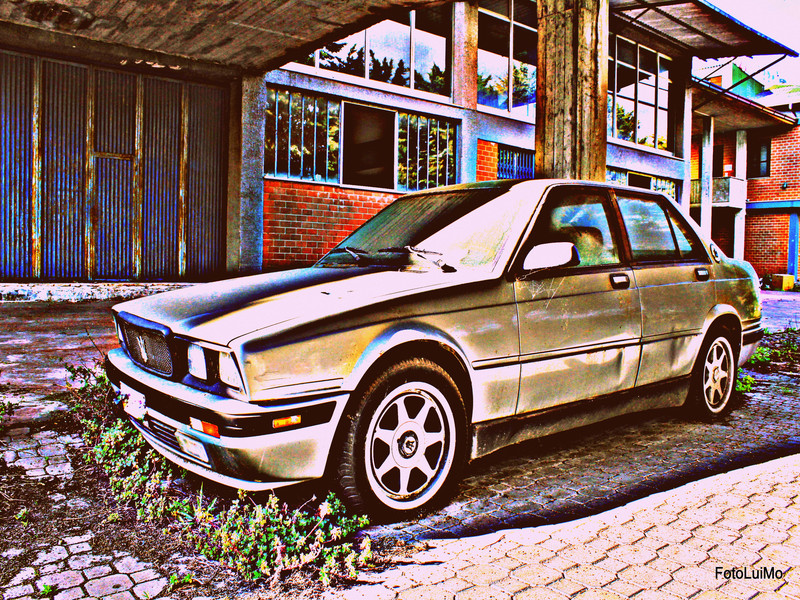 After a few steps down next to the main entrance, we were already inside the fence. The first thing we found was a Maserati Biturbo ’92 forgotten there. Then we head to the sheds of the factory, large and without machinery, even if you could find on every corner a bit ‘of garbage and many shoe soles.

The latter made us deduce immediately that it was a shoe factory or something similar, in fact, after a brief search on the internet, we found that this company was producing machines for shoe factories and shoemakers. We cannot wait to see the offices, then, after a few shots, we head straight out of the halls and climb the outside stairs that connected it to them. After the small entrance we immediately notice that the floor and the wall that divided the hall from the offices, were covered with a carpet of a dark color. Since from the entrance, was easy to see the large offices with reception, closed by Plexiglas walls, so transparent.

The gateway was mixed with the color of the carpet... a boost and here we are in a large room where the special desks were able to define the position of those who worked there. I immediately noticed the many pots of fake plants, that with their colors keep alive the palce, were still there. But the most striking thing in, are small and various personal items that former employees have left. In the northern part of the room, the wall on the left is covered by a bookcase full of binders and documents and, near the desk that flanked, a school blackboard. From the other side, however, there is a spiral staircase that leads to the attic of the building, set up as an archive, which, despite the terrace door nonexistent, appeared dark and a bit’ claustrophobic.

We came back below and enter the first door on the right near the entrance, a sort of waiting room furnished with two dark red, almost brown sofas, a beautiful but simple showcase, a hanger to the wall and a few hanging paintings. Just as the other two rooms were furnished: wooden desks, dark windows, leather armchairs and a bathroom with towels and soap. We could not find the year when the factory was founded, but the style of furniture reminds us of the 80s.

Convinced that he had visited the entire building, we go out down the stairs, but we see a another small apartment / office partly furnished with some desks, a small refrigerator and a little table covered with cigarette butts and several bottles of beer and wine, some unopened … it goes without saying that we were not the only ones to pay a visit to the factory. We give ourselves a little more ‘time to take a look at the back, overlooking the beautiful fields in the area. This is perhaps the most vandalized zone: small and numerous pieces of glass on the floor, garbage and a large open shed, always included in the structure.

We dedicate some last shot, and ended this Sunday exploration, we go up the narrow and hidden stairs that take us back to the car, leaving the factory behind us.