“Christ has really stopped at Eboli, where the road and the train leave the coast of Salerno and the sea, and reach into the desolate lands of Lucania. Christ never came here, nor the time, nor the individual soul, nor hope, nor the link between cause and effect, reason and history.” 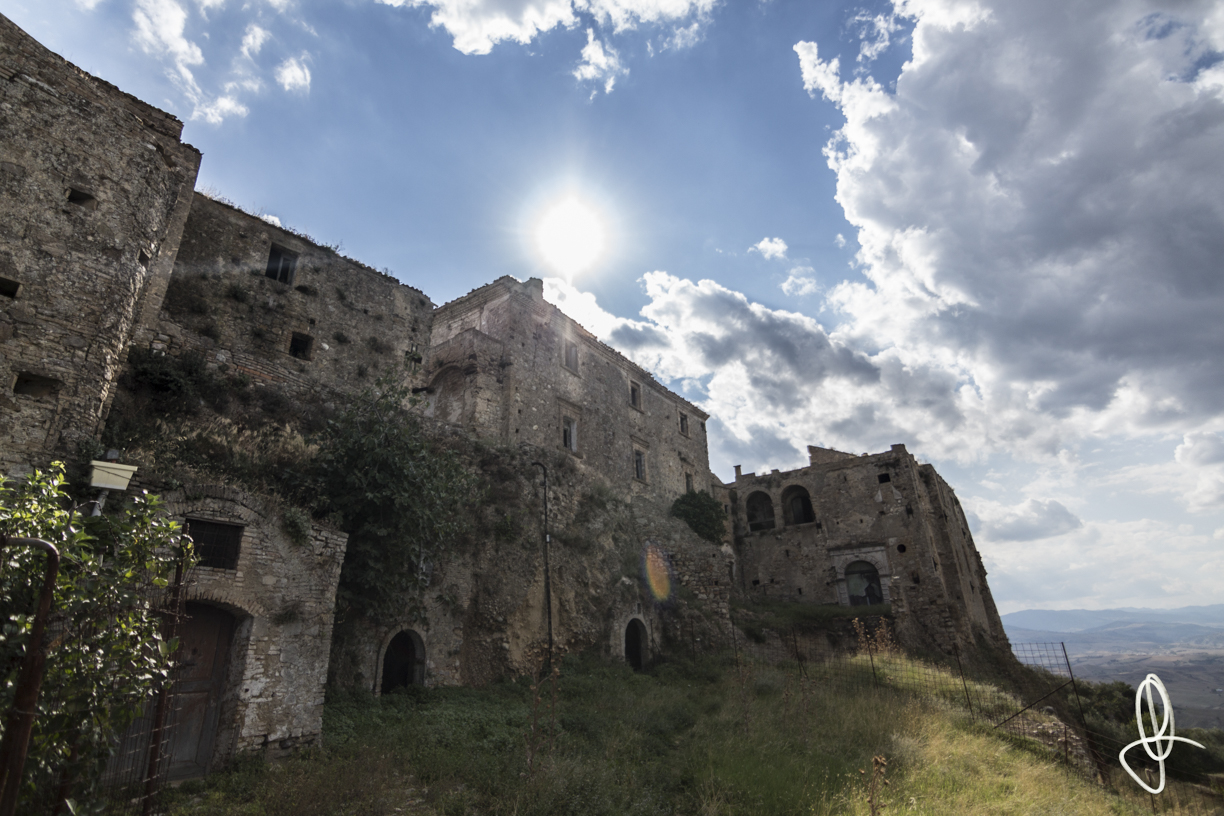 Thus begins the novel that describes this ancient Medieval town of Lucania. Montedoro was called not too long ago ‘for the wheat fields that -as say the locals- surrounded it, but the origin of the name is from the eleventh century thanks to the Archbishop of Tricarico who called the territory Graculum (small plowed field). Tracing the history, you find that what is now a dilapidated cluster of houses, in the Middle Ages was an important military crossroad, dominating the valley of the two rivers that run on its feet. After the period of banditry, we come to the present day, to the story that everyone knows: that a landslide in 1963 forced most of the population (nearly 2000) to move downstream. Since Craco rests on an outcrop in the marl and clay, the landslide was not of natural origin. 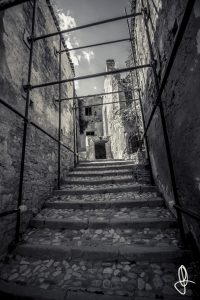 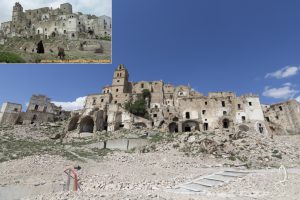 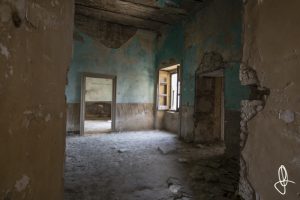 It seems that the real reason was rather the human hand, through the construction of a new aqueduct that was supposed to distribute valuable fresh water to the city. The aqueduct was built by a friend of the mayor. These works were carried out quickly and badly, causing numerous losses that pouring into clay soil below the town and with the help of the enormous pressure that can reach an aqueduct has undermined the roots of the buildings of the old village. Craco is therefore not collapsed downstream in an instant, rather it collapsed on itself for the progressive lack of land under houses. In 1972 a flood aggravated the situation, helped by an earthquake in 1980 that marked the abandonment of the village. That’s why it remained intact becoming a ghost town.

There are many stories that tell of houses perfectly preserved for years, which unfortunately have not arrived to the present day for the usual vandalism, looting and neglect. With this informations I was obligate to visit it during my way back from Cosenza. ( I see the film ‘Christ Stopped at Eboli‘ only once back home, so my visual knowledge was limited to the ‘usual’ photos that run on the network.) To get to Craco the road winds from the forest green of the coast to yellow ocher of the endless prairies where like sleeping giants you can see the gullies. It goes like the set of a Western movie or a film set in ancient Palestine, with houses that blend with the landscape. When it appear after a bend, Craco rips your breath as a very strong emotion. (The same that I felt again watching the movie). Its unique profile, on which stands the great tower, the many shades of the rocks, the land that blend with the bricks, the few remaining plaster. 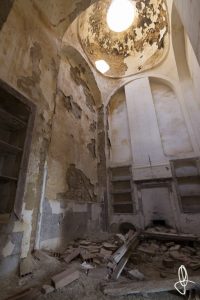 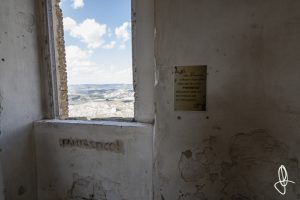 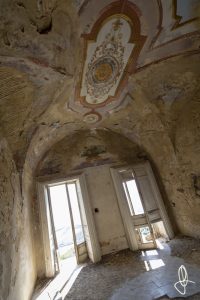 I slow down, to allow time to fix forever in the memory this picture, the houses clinging to the rocks with those dark windows that look like eyes that stare, to understand who you are and what are you doing here, since is no more a place for livings. That’s the first impression of Craco: an ancestral place where time was stopped, and where Christ never stopped! Visiting it is in some ways a unique view, walking through the deserted streets trampled 30 years ago by farmers and the elderly in their daily routine, finding in the houses treasures of little value as a gas stove, a few chairs, or maybe a fresco in the most luxurious palaces. In any case, the visit is guided (on the safe part of the village) and in an hour you have the chance to hear the whole recent story with various anecdotes and observe the best preserved area. We start along Corso Umberto, the main street, with several rows of houses: shop / stall on the ground floor, apartment on the first floor, all with their finely worked railings now covered with rust that accompany us in the square, with the remains of cinema, of pastry, of the bell tower of the main church. You think that in this place a few decades ago there was life on Sunday mornings in church, the pastries for lunch and maybe in the evening at the cinema to see a movie of Totò. From here the walk is all uphill.

On top of the village there is a small square, where once focused the symbols of power: on the one side the stately Palazzo Grossi, on the other the main church. Access in the two buildings is restricted for security reasons, but can be seen through an open balcony, a beautiful fresco painted on the ceiling.. What better excuse to get away from the guided tour and penetrate inside to observe that fresco closely! Heart of the visit to Cracow, however, is the Norman tower (about 1040 AD): from a window of the bastion you can admire the endless prairies of Basilicata and the famous badlands. A masterpiece painted by nature, framed in the window of stone (emphasized by the comment of an unknown visitor). 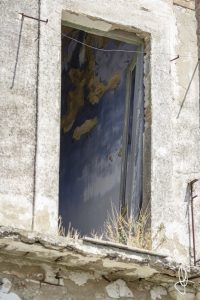 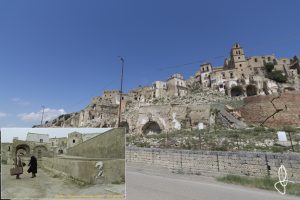 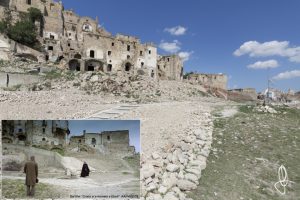 But, as a good urban explorer, I could not let me miss the unofficial visit, so after I refreshed with sandwiches and beer and after requesting some information to the natives, I take my stuff and leave for the off-limits area which, was not so off limits… After a few meters of ibex style climbing I find myself behind the Norman palace (that stands on the kiosk of panini) that borders the northern part of the village. Walking the cobbled streets you can think of being in a Middle East village, warm colors that still cover the plaster, the arches that adorn every entrance and vaulted ceilings of homes. Only a few tiles remained engraved with the names of the streets and remind us that this is a local reality. So between a path and a slump I continue my not-guided visit, slipping in the houses still intact, still discovering colored plaster, fireplaces at head height, rooms with vaulted ceilings, wooden shutters that still defy gravity hanging in the air… While I write this article I think about the film just seen, with these occupied buildings, the streets clear of debris and trampled by children playing, plaster colors… overlapping my images with peeling walls, the streets filled with rubble, ceilings without floors. I wonder if today would be the same, if only Christ had stopped a little ‘later. 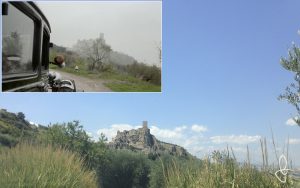 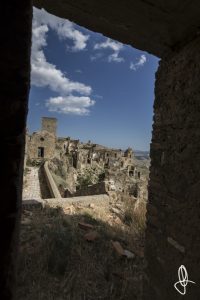 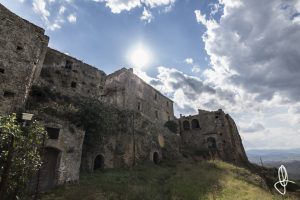 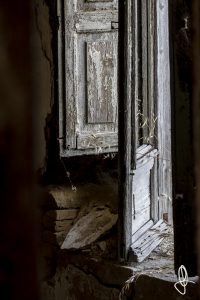 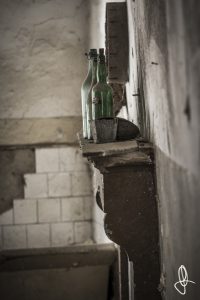 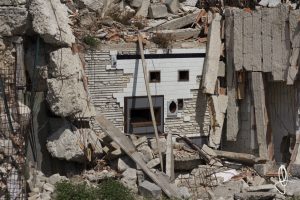 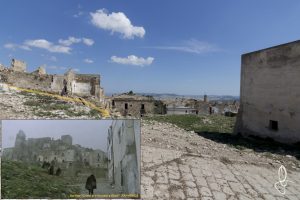 Born in ’76, photo-reporter, musician and artist. Nowday he does not work for Ascosi Lasciti but he’s leading his personal project : the “P.L.A.I.” (italian abandoned places and locations)